Rideau Clock Repair is closed to new clients until further notice. Due to health issues House visits are no longer an option.

Thank you for your many years of interesting and beautiful clocks. It has been a pleasure restoring your mechanical marvels.

In the fall of 2016, I had the opportunity to clean and repair the authentic and beautiful Vienna regulator that decorates the office of the Austrian Ambassador in Ottawa.  This three and a half foot clock by S-Plapert of Wien had not been working for a number of years because there was no money in the budget to have it repaired.  After a special request to the Austrian government, funds were made available to restore this beautiful heirloom. I am honoured to have been chosen for the job. 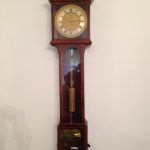 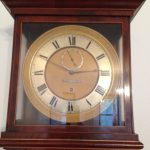 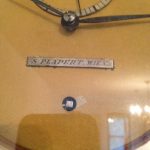 I am posting pictures of gorgeous clocks I had the privilege of restoring and repairing successfully.  Here is a tall case clock by William James of Brecon (South Wales), probably late 18th century. 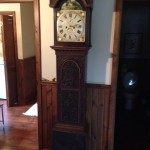 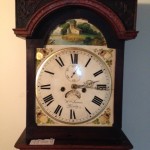 Here is another 1800 tall case by Williams Thomson from Dalkeith.  The dial is very well preserved and appears to be original.  I did not find information about this clock maker. 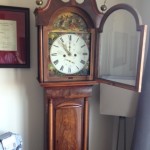 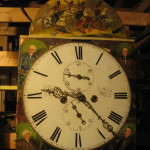 I had the pleasure of having 2 French portico clocks to repair.  I kept them as long as I could and enjoyed them.  But, sadly, I had to return them to their owners.  One is by Julien Le Roy à Paris who was the King’s clock maker in 1739. 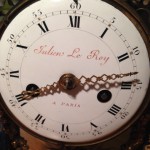 A mantle clock that belonged to Canada’s first Prime minister

The Right Honourable Sir John A. MacDonald, Canada’s first Prime minister and one of Canada’s Fathers of Confederation, was a very busy man during his nearly fifty year political career. His family lived in Kingston, Ontario, where he studied law, but with the decision by Queen Victoria to choose Ottawa as the capital of Canada, Sir John A. eventually moved to Ottawa.

He became prime minister in 1867 and, except for 5 years between 1873 and 1878, he occupied this position until his death in 1891.
In 1870, he rented a house that had been build recently on a cliff overlooking the Ottawa River – a house known nowadays as Earnscliffe. In 1883 he bought the house and lived in it until his death.
The Victorian manor subsequently belonged to several private owners until it was sold in 1930 to the United Kingdom to become the residence of the British High Commissioner. Several pieces of furniture, including some that had belonged to Sir John A. were sold at an auction.

Mrs. Margaret Morrison, wife of Cecil Morrison, the well known businessman who founded the famous Morrison-Lamothe bakery in Ottawa, attended this auction with the intention of acquiring some of the items that belonged to Sir John A. She asked the caretaker of the house, who had been looking after the property for many years, which of the items in the house had really belonged to MacDonald. He pointed out an armchair that had sat at the foot of Sir John’s bed and a mantle clock.
Mrs. Morrison bought both items and brought them to her home on Fuller Avenue. They are still there and I had the opportunity of seeing them on a visit to this stone house – which was built in 1828, and is the oldest house in Ottawa. This house is now the property of Mrs. Grete Hale, C.M., the daughter of Margaret Morrison. 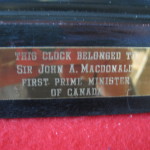 The time and strike clock is made of black marble. Its movement is French made but the maker is not identified. It strikes the hours and the half hours on a typical French bell. 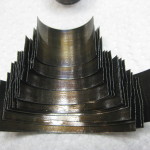 A brass plaque on the front of the clock reminds us that it was the property of the first Prime Minister of Canada.

As a clock collector and repairman, I asked if the clock was working. “ It has not worked for many years, said Mrs. Hale, It stopped the night John Diefenbaker (the Conservative Prime minister) was defeated by Lester Pearson (the leader of the Liberal party) in 1963, and I was told it could not be fixed”. This was a challenge, which I would not refuse. Mrs. Hale let me take the clock home and I was able to repair it, cleaning it and replacing the time mainspring and the suspension spring.

The clock is now back in a prominent place in the library of Grete Hale’s lovely home. 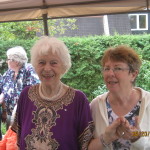 Lots of scrubbing; polishing pivots; new cables; repair to counting rack; it does look a bit better.  I need a new crutch, a suspension bridge and a flywheel. It is coming along. I found this treasure at the Ottawa Antique market on Bank Street. It is in a poor shape; the case must have been nice years ago and the movement is the dirtiest I have seen in my life; it is also missing the fly wheel and part of the suspension. The face is brass andin good condition, although it’s missing the 4 posts to attach it to the plate. It reads Robt Clidsdale, EDINBURGH. This name does not appear in Britten’s list of old clock and watch makers. I am in the process of restoring it and I will post pictures of my progress as time goes by.

This clock has an interesting escapement to make the pendulum swing from back to front. See escapement at top of page.